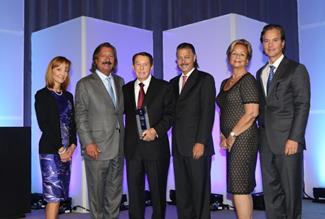 Produced by the National Association of Broadcasters (NAB) and the Radio Advertising Bureau (RAB), the Radio Show is a professional conference that brings together radio broadcasters and industry colleagues to share knowledge, discover the latest innovations, network with industry leaders and explore creative business strategies for the digital age. The 2015 Radio Show was held September 30 – October 2 in Atlanta, GA.

The prestigious National Radio Award is presented annually to an individual who has shown exemplary leadership in the radio industry; NAB's Radio Executive Committee selects the award recipient. "George Beasley's entrepreneurial spirit and passion for our business have made a very positive and lasting impact on all of Radio," said NAB Executive Vice President of Radio John David. "The NAB is proud to recognize a true family broadcaster for a remarkable and honorable legacy in broadcasting." NAB President and CEO Gordon H. Smith presented the National Radio Award to Mr. Beasley during the Radio Show Luncheon on Sept. 30th.

Radio Ink magazine's Radio Wayne Awards honor sales and management professionals whose hard work, dedication, and creativity separate them from the pack. Their highest annual award is 'America's Best Broadcaster,' which was bestowed for 2015 to George G. Beasley by Radio Ink Founder Eric Rhodes during the Radio Show Advertiser Breakfast on October 1st.

George G. Beasley founded the company that bears his name in 1961. He purchased his first Southwest Florida radio station in 1986 and moved the corporate offices to Naples in 1988. Throughout his 54 years in radio, Mr. Beasley has served on numerous boards and earned countless honors and awards from the broadcast industry, the local communities in which he has participated, as well as various civic and charitable organizations. Among them, the Library of American Broadcasting honored him as one of the 'Giants of Broadcasting' in 2012. Mr. Beasley has consistently been acknowledged by Radio INK magazine in their annual "Forty Most Powerful People in Radio" issue. He is a current member of the Broadcasters Foundation's Board of Directors and a 2003 recipient of their esteemed Broadcast Pioneer Award.

"George Beasley is a true broadcaster in every sense of the word; his passion for radio and his belief in the power of our medium is as strong today as it was when he built his first station in 1961," said Beasley Media Group President and COO Bruce Beasley. "He is an amazing entrepreneur who has built a pure-play radio company that values its 800-plus employees, encourages unparalleled community service, supports its local and national advertisers and strives to produce the best in music, news and entertainment for Beasley Media's 7.7 million weekly listeners through 52 radio stations nationwide. George Beasley is also my dad, so sharing the experience of the 2015 Radio Show where he received these meaningful awards is something I shall remember, always."

Beasley Media Group, Inc. is a subsidiary of Beasley Broadcast Group, Inc., a radio broadcasting company that owns and operates 52 stations (34 FM and 18 AM) located in twelve large- and mid-size markets in the United States. Founded in 1961, Beasley Broadcast Group, Inc. (NASDAQ: BBGI) is headquartered in Naples, Florida. Approximately 7.7 million consumers listen to Beasley radio stations weekly over-the-air, online and on smartphones and tablets and millions regularly engage with the Company's brands and personalities through digital platforms such as Facebook, Twitter, text, apps and email. For more information, please visit www.bbgi.com.