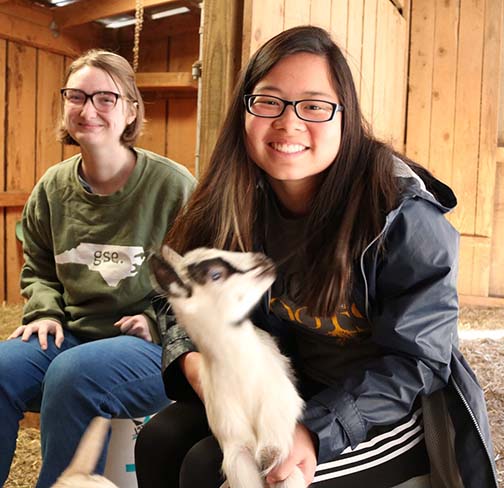 When things are challenging, Appalachian State University senior Rebecca Brown said she sometimes thinks back to her favorite moments on the farm, including her time watching the pigs.

Brown, a member of the Honor’s College who is graduating with her B.S. in Sustainable Development with a concentration in Agroecology, plans to continue watching and studying swine as she pursues her master’s degree in the fall at The Ohio State University. She was selected as the undergraduate spring 2021 commencement speaker for the College of Fine and Applied Arts.

“I remember when we got to the farm, all the pigs came running up to us with curiosity, wanting to see who we are,” Brown said. “It made me so happy to see their curiosity toward us, and I admired how interested they were in us and unafraid. Personally, I want to be more curious and unafraid of new and unknown opportunities. Easy or challenging—I want to make the best of it. This semester has been like that—I was able to take what I love to do, and enjoy it by embracing it.” 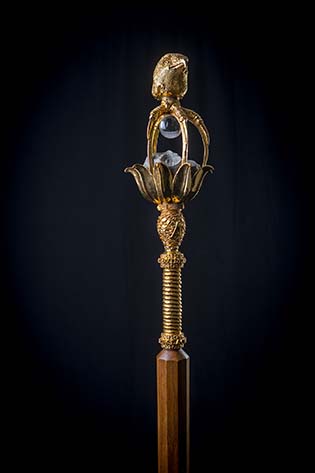 Dr. Nancy Oliver, associate professor and coordinator of the Apparel Design and Merchandising program, has been selected as the College of Fine and Applied Arts' spring commencement mace bearer. Oliver is retiring from App State after 12 years.

During Oliver's time at App State, the ADM program has tripled in size and offers students experience in multiple parts of the fashion industry. Oliver's love of sewing started when she was 10 years old and her mom taught her to use the sewing machine to make a baby doll blanket on a snowy day.

Read more about Oliver, the ADM program and her fondness for App State, her undergraduate alma mater. 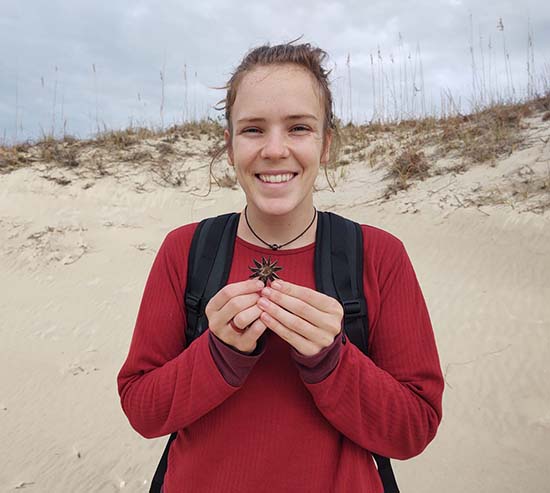 Wilmoth, who graduates this spring with her master’s degree in Appalachian State University’s Appropriate Technology program, said she realized in that eye-opening moment in Africa that she had taken this precious resource for granted.

“My mom and I traveled to Rwanda to volunteer at an orphanage for a month after I graduated from high school in 2014,” she said. “When we stepped outside the grounds of the orphanage, I saw two young boys carrying milk jugs for gathering water. They filled them with water from a stagnant pond with cows nearby. I realized then just how valuable and important clean water is, and that people don’t always have access to drinking water that is safe.”

In her studies at App State, Wilmoth researched a variety of different natural energy systems, including water, with her thesis focusing on factors that affect water filter adoption and use in resource-limited communities. Based on her accomplishments, she was inducted into the Cratis D. Williams Graduate Honor Society and chosen as the College of Fine and Applied Arts’ graduate student speaker. 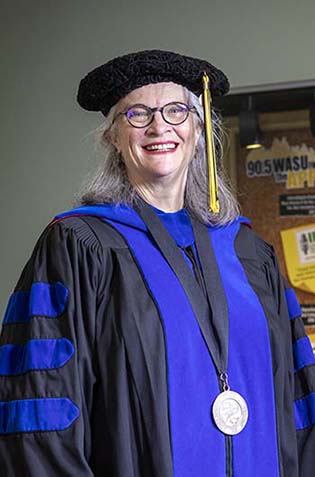 The College of Fine and Applied Arts is honoring Interim Dean Janice T. Pope, PhD, as its Banner Carrier for the spring 2021 commencement to thank her for her leadership since August 2019 as the college's interim dean.
Pope joined the Appalachian State University faculty in 1995 and is a professor and past department chair for the Department of Communication.
She led the college during the COVID-19 pandemic, which has been recognized as some of the most difficult times in the university's history.

We are honoring our department chairs with the role of department banners. Thanks to each of them for their leadership on behalf of the college.